Excerpt from International collaboration results in play about borders, by Linda B. Glaser, as published in Cornell Chronicle newspaper at Ithaca: 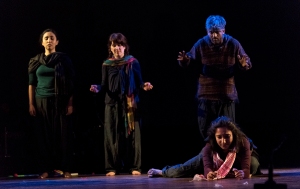 When you’re creating a play about the shared experiences of people encountering borders, 7,837 miles between the collaborators is nothing – at least for Debra Castillo, who’s been co-teaching (with Anindita Banerjee) the Bodies at the Border distance learning class for years.

For Castillo, the solution to having writers and actors on separate continents was simple: hold meetings and rehearsals via Skype. The international collaboration includes academics and artists with diverse cultural heritages across Asia, Africa, Europe, North America and South America, and is supported by the College of Arts and Sciences and Jadavpur University in Kolkata, India.

The result is “Root Map,” which had its inaugural performance Jan. 27 in Kolkata, to be followed by performances March 2 in Ithaca and March 4 in El Paso, Texas.

Read the full article at: http://news.cornell.edu/stories/2017/02/international-collaboration-results-play-about-borders

Excerpt from Stage, as published in The Telegraph newspaper at India: 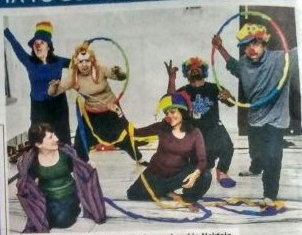 I could never meet a friend because the river that separated us was also an international border. I was only five years old when my mom and me almost smuggled ourselves across the border. A friend of mine had migrated, thinking the grass would be greener on the other side. Unfortunately, it wasn’t. I felt as if it was a carnival of sorts at the border when I crossed it for the first time. It was almost like an iron wall stopping us from reaching out to our loved ones. On family occasions, many of our relatives couldn’t attend the ceremonies because they didn’t have the right documents to cross the border. At the airport security check, they always used to take my mother away to a separate counter while I was left with my little sister in another queue. Why? Because my mom had a different citizenship than ours. They don’t care if you are family, they will act like robots and subject you to endless queries and put you into different queues just because of the different nationalities of the family members….

This paragraph is not the account of a single person. In fact, almost every single sentence above has come from a different individual from a different cultural background, with different experiences, a different mother tongue… English, Bengali, Portugese, French, Spanish, Dutch, Yiddish, Pidgin…. Yet, the common thread running through all is their relationship with borders.
These stories will come together in the theatre performance Root Map, to be staged as part of Tell Tales presented by Chaepani, at Gyan Manch on the evening of January 27.
t2 dropped in at the rehearsals to find out what had brought the team together from across borders…

Excerpt from Collaborative play transcends borders, cultures, by Linda B. Glaser, as published in Cornell Chronicle newspaper at Ithaca: 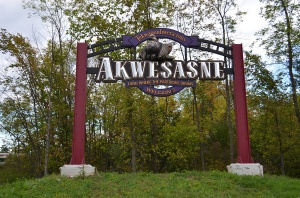 A new play about borders has found an unusual way to transcend them: by integrating local experiences in each new place it is performed. When it travels Aug. 26 to Akwesasne, the Mohawk Nation territory divided by the U.S.-Canada border, the script will incorporate stories of local Mohawk people, some of whom will join the cast.

“Root Map,” an international collaboration between Cornell University’s College of Arts and Sciences and Jadavpur University in Kolkata, India, interweaves stories from different cultures to explore the similarities people experience when encountering borders. It had its inaugural performance Jan. 27 in Kolkata, India, followed by performances in Ithaca, New York, and El Paso, Texas. In each city, local actors join the production, contributing new material to the script that reflects their experiences with borders.

Read the full aticle at: http://news.cornell.edu/stories/2017/07/collaborative-play-transcends-borders-cultures

“More than half of the undocumented immigrant population has a high school degree or higher”.